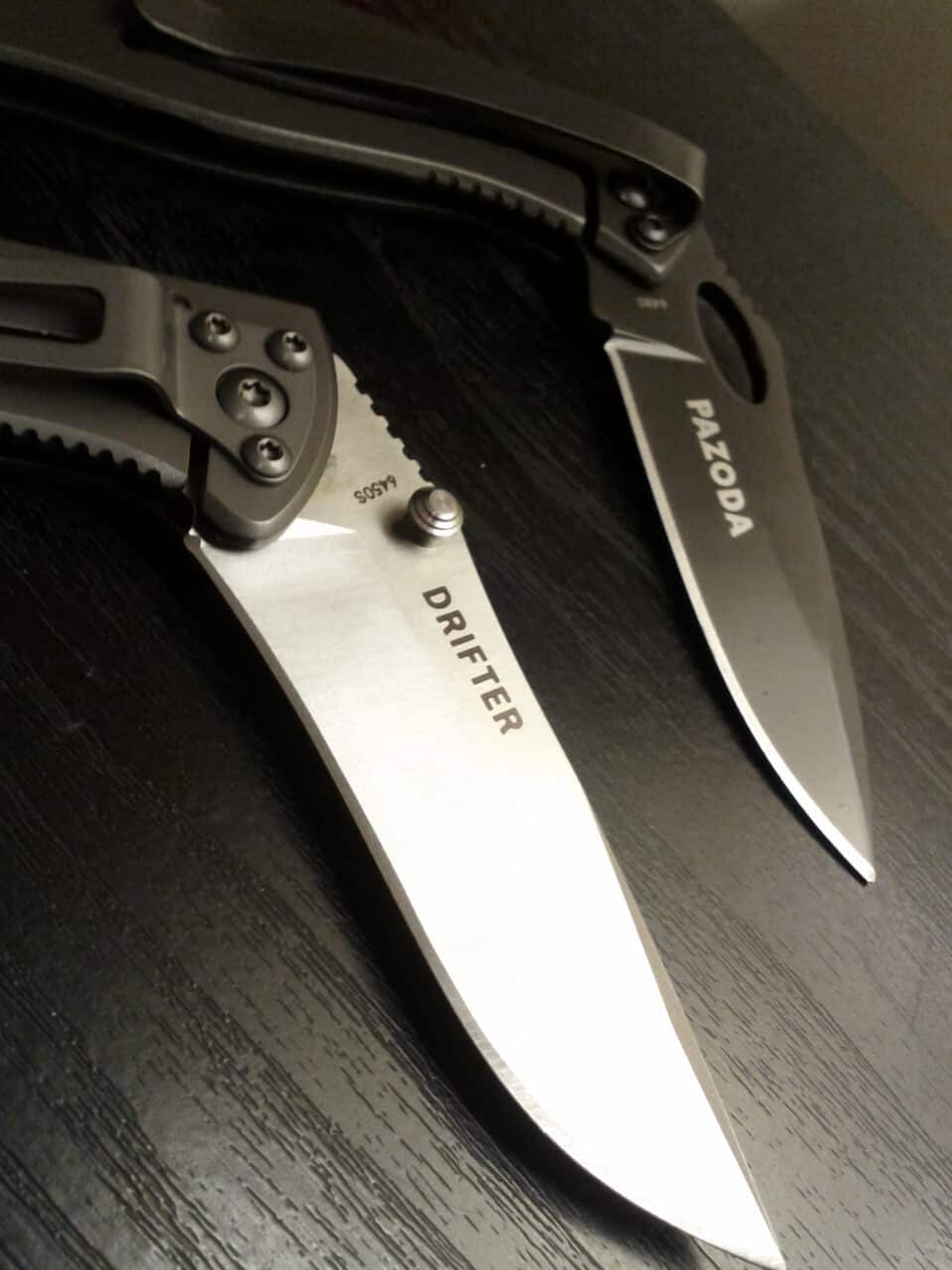 A folding pocket knife is exactly what it sounds like – a small foldable knife that you can carry around in your pocket. Even though it is quite handy, not all people carry folding knives but almost everyone is familiar with these tools. Pocket knives have a rich history and come in hundreds of styles. You can choose from a whole array of features for what suits your needs and preferences.

If you are a pocket knife enthusiast, then you would already know that there’s more to this item than just the blade’s material or the handle’s functionality. But if you aren’t, and are looking for some useful tips to help you choose lock knives that fit your personality, you should know that the knife lock system is among the most essential criteria when choosing folding pocket knives.

Locking systems are mechanisms that stop the knife from folding onto your hand during use. We have compiled below a comprehensive lock guide to help you decide what kind of knife lock is most suited to your needs and that you would find easiest to handle.

Below are some generic locking mechanisms that you will find in most of the folding knives you see during your search. 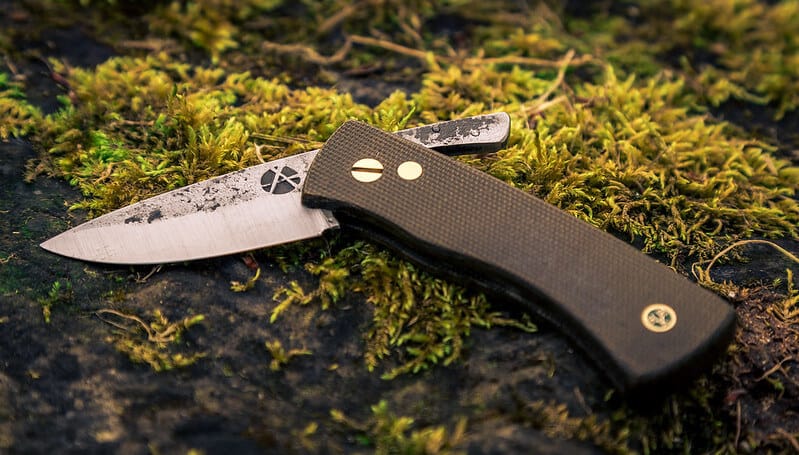 This type of knife lock is not really a lock. There are no locking mechanisms in the knives that you can call a lock. These knives simply consist of blades, fulcrums, and simple handles. The only thing remotely close to a locking mechanism is the slightly bent add-on of the blade on the pivot in the opposite direction of the blade. This extension prevents the knife from turning 360 degrees and the user must apply pressure (or friction) on it when using the knife.

Although this knife can be unsafe when used by an amateur, it is the oldest knife we have listed. Proof of its usage goes as far as the time of the post-Republican ancient Rome. To switch the knife from an open position to a closed position, you have to carefully apply some pressure on the back of the blade with one hand while firmly holding the knife with your second hand. 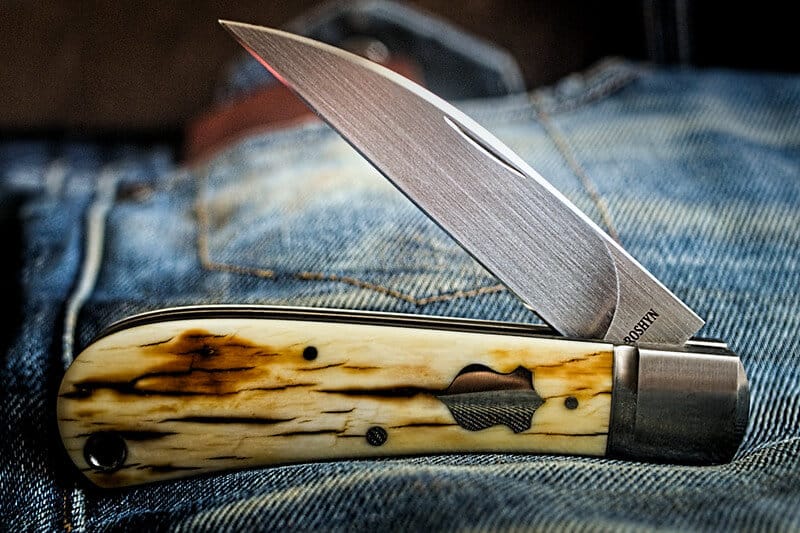 This type of knife, also, does not technically have any locking mechanisms in place but it does have another mechanism that makes it safer than friction folding knives – this lock uses a two-way safety design. The first type of position adds resistance, keeping the knife blade in its folded state unless pulled manually beyond 90 degrees. The second position keeps the knife fully extended using the same type of resistance against the knife folding back with the help of a back spring in the handle. This slip joint system is found commonly in Swiss military knives and Boy Scout knives. 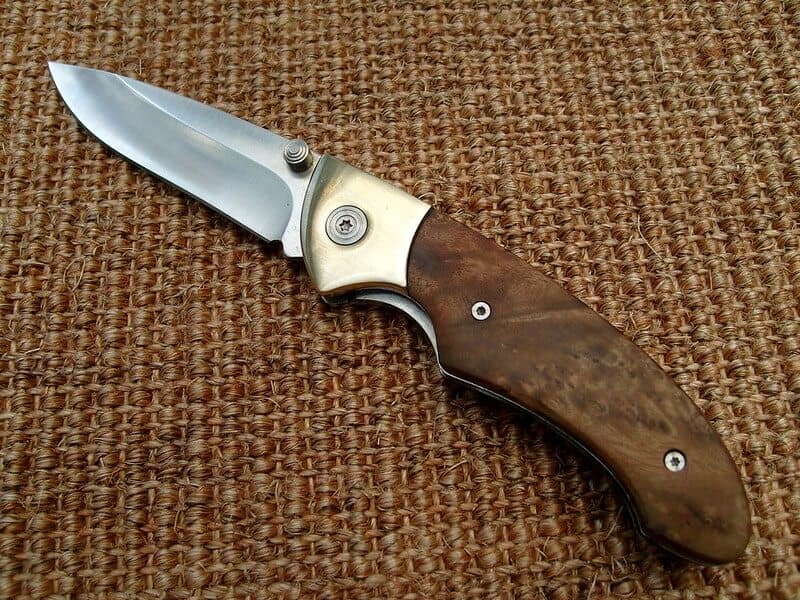 A liner lock is very common in folding pocket knives for everyday use. The liner lock system comprises a stainless steel spring along the handle cavity (where the knife rests when turned) that moves in when the fixed blade is in open position and prevents the knife from folding back down. To shut the blade, you have to physically shift the liner lock to allow the blade to go back in. The liner lock knife or lock liner, albeit very common, requires frequent repair and becomes less secure with use over time.

When it comes to Back locks, these are slightly less used compared to their liner and frame counterparts. These are found in many classic American knives. The locking mechanism in this knife is practically the same as liner and frame locks in that a movable spring/spine in the handle cavity prevents the blade from turning backward.

The only difference is that the lock mechanism is located at the handle’s rear – as the name suggests – rather than in the front. Disengaging the lock is also different in a back lock system. There is a slit from where the user can push the lade’s back to disengage it but it sometimes gets difficult and requires the use of both hands. But back locks are also more sturdy than liner or frame locks.

Button locks are much less common than all the knife locks we’ve listed so far. They are mostly used in automatic knives and require no significant labor on the user’s part in deploying the knife.

This lock type has been modified slightly and used in manual knives also such that it holds the knife ajar with only slight resistance when trying to close, and also makes it easier to open.

The lever lock works on a similar principle as the button lock. However, it comes with a few functional variations. The shaft acts as a safety latch, keeping the blade in a locked state and preventing it from deploying. Second, once unlocked by flipping, it allows the user to apply force on it and pull back a plunger which releases the blade. To shut the blade, you have to press the lever again and fold the knife. This lever lock mechanism is virtually exclusive to automatic knives.

A clasp lock has a strong piece of metal (sometimes a ring) at the top of the handle. When the user opens the knife, a bar engages with the clasp and locks it into place. To close the knife, the user pushes back on the blade’s clasp to release it and disengage the lock.

The mid lock is basically a variation of the back lock but with the lock system in the middle of the handle instead of at the back. This position allows the knife to handle more pressure and if you look at the knife, you’ll notice that the spine doesn’t extend all the way to the back.

Also known as brand-specific lock systems, propriety lock systems are knife locks that have been developed by a particular knife manufacturing brand exclusively for their own products. This means that unless a licensing agreement is involved, you won’t find them on any other knives. Of course, simply because a company has propriety locks doesn’t mean all their knives incorporate it. But as a user, you should know your way around some of the most common ones. 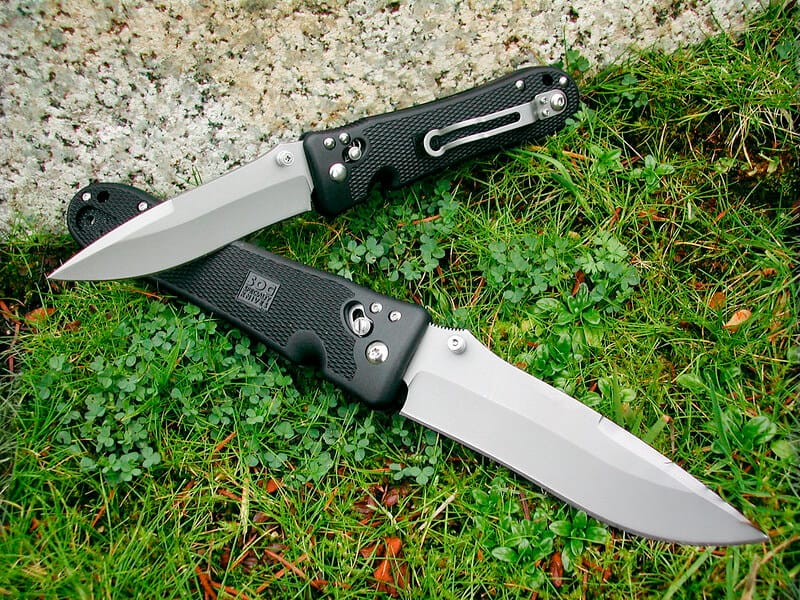 On the face of it, SOG’s Arc lock seems to work similarly to a button lock. But there exist some differences big between the two. The latch is located in the handle in a curving position – which is how it got its name – and has a single-sided vault that is perpetually engaged and applies force on the lock shaft.

The blade’s tang moves beyond the lock when the user releases the blade. This mechanism allows the lock shaft to house itself in a place at the back of the knife’s tang. This mechanism keeps the blade from closing. To shut the blade, the user has to tug the Arc lock, allowing the blade to swing back inside the handle. 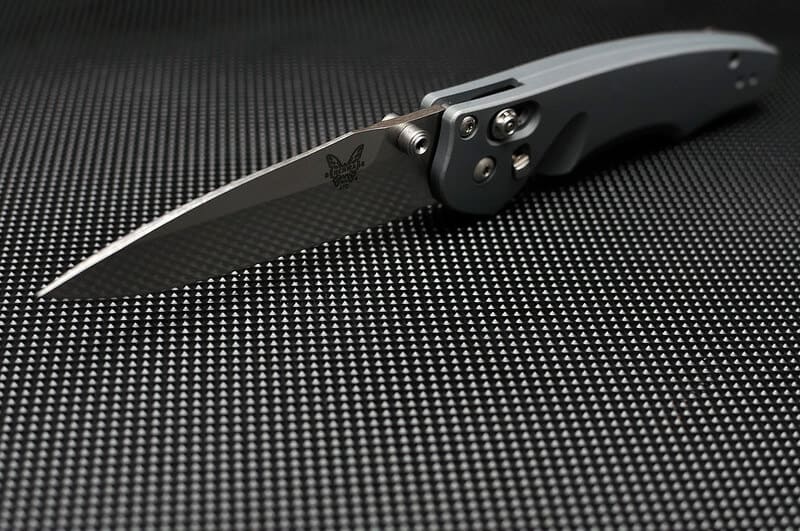 Axis lock functions in much a similar way as the Arc lock above although they are different enough to have had separate patents filed for each design. It also features a mechanism in the handle’s back with a single-sided spring, a lock bar, and similar pressure applied to keep the knife blade from swinging back once deployed.

To release the axis lock, the user needs to push the bar back so that the knife can slide in again. This lock type is also very secure, but the spring may lose stability the more it is used. But that’s an issue inherent to all knife lock types.

The compression lock is one of the inventive lock designs the world has ever seen. It is built on a previously designed concept but the new mechanisms have transformed it into an even more secure and sturdy locking system. This lock is much like the liner lock in that it also consists of a metal liner in the handle which shifts under the blade’s base to prevent it from closing back without shifting the vault away.

This mechanism, however, is situated in the handle spine instead of the forefront and that means that not only is it more convenient to use, it also bypasses the liner lock’s main downside – the weakening of the lock by constant pushing back of the liner. The Compression lock does not push back the spring and thus increases the lock’s security and reliability and is one of the best locks available out there in the folding knife world.

Cold Steel’s Tri Ad lock was developed by Andrew Demko and is a kind of back lock but slightly different. It is much more reliable and sturdy than a regular back lock but operates the same: there is a slot in the back of the knife that acts as a button when the knife is opened and allows the user to apply pressure and close the blade back. Within the handle is a cutout shaped like a hammer which allows a parallel cutout in the stand’s rear area to hook into it and provide further reliability along with an added stop pin that prevents a vertical blade. This lock system allows the user to open and close the knife securely and without much effort. 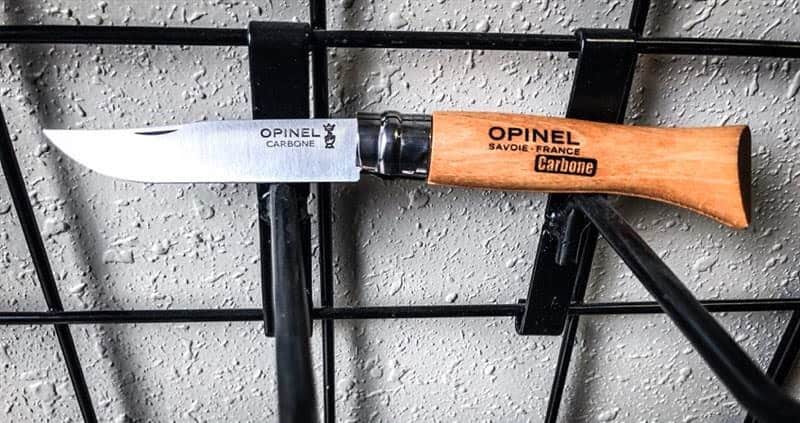 The Virobloc Safety Ring (also known as the Collar lock) is, without any exaggeration, a sheer stroke of brilliance. It is not only simple to operate and hence convenient to use, but also much more secure and reliable than other lock systems – a heaven-sent combination. The ring in the lock acts as a two-way safety device, wrapping around the handle’s cushion and meeting the blade tang.

The bolster also has a slot through which the blade can swing. When the knife is either in an open or closed position, the ring rotates and manually blocks the cutout space, keeping the blade tang from swinging back in or out. The ring doesn’t hold into place, which means it isn’t fully safe) but it provides an easy answer for questions about the safety concerns in a lockless knife. 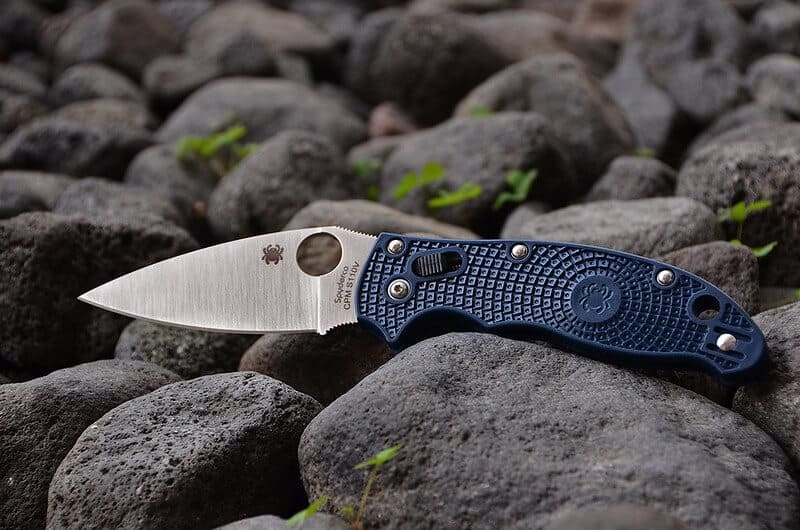 This locking system was first designed and developed by Sal Glesser and improved by Eric Glesser for Spyderco. It is a variant of the Axis lock and is much simpler in operation. As the name suggests, the ball bearing works with a slope on the blade’s tang, and a coiled spring on the shaft allows for the required tension. It is actually an interesting lock to use once the user has gets some experience with it!

Despite knowing all the lock types, there is no one correct answer to the question of which knife lock is the best. Different lock types suit different knife styles, different purposes, and unique user requirements. For example, some lock types are a definite no for the left-handed majority – such as most lock liners and frame locks which are difficult to release with the left hand. Some users want a lock that is extremely secure such as the Tri-Ad lock and ring lock.

Whichever lock knives you choose to use, make sure that they align with your requirements as a user. You’ll find those lock knives that suit your purposes will go a long way with you.