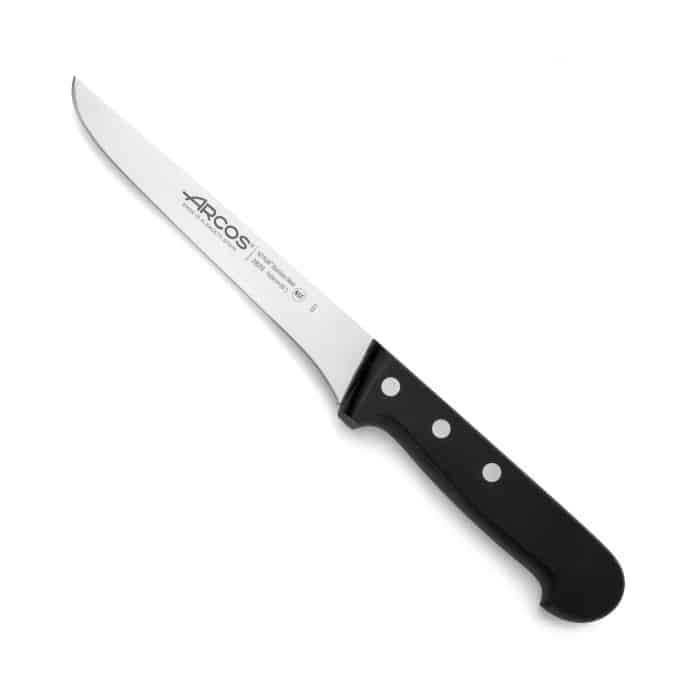 Due to its design, it’s not always easy to find proper usage for a boning knife. For one, it looks quite out of the ordinary. Yet, there is a good reason why this special kitchen tool is the only one with this particular shape.

A boning knife’s blades are long, thin, sharp, and extremely flexible. That makes cutting with this knife a much easier affair compared to the usual ones. As for its ‘specialty’, a boning knife can effortlessly detach raw meat from the bone. These are razor-sharp, and the harder the blade, the more durable it’ll be. On the other hand, dull blades may rip the meat off the bone rather than slice it. However, that impacts both the cooking process and the final look of the dish.

Today, we’ll go through the common usages of a boning knife and share tips on how to use it as a chef.

What Is a Boning Knife?

To begin, let’s clarify what a boning knife is and how it’s built. Only then can we summarize its range of appliances.

Let’s start with the obvious attribute: its slick appearance. A boning knife consists of a long, thin, sharp blade around five and seven inches in length. The knife features a stainless steel blade edge with a small slope up to its sharp tip. Thankfully, there is an extra safety feature that goes well with this much cutting power. Namely, it has a little finger guard to protect your fingers from accidents during cutting. All this makes the boning knife easy to identify and effective to use.

How to Use a Boning Knife Correctly

A boning knife’s signature shape makes it somewhat tricky to handle. The flexible blade and stainless steel finish differ from the majority of kitchen utensils. However, that’s not to say that boning knives are unwieldy. As is with other higher-class equipment, you can even master it with enough time and practice. Start by using your preferred fist to grasp the knife. Then, achieve a firm and secure grip. Hold the knife by wrapping your middle, ring, and thumb around the handle.

To keep the piece of meat or fish stable on the chopping board, use your non-dominant hand to press it down. At all times, avoid cutting yourself by keeping your fingers curled. Put your index finger tightly on top of the blade, thus stabilizing your hand’s movement. Use the boning knife’s pointed tip to create little cuts in your meat. For delicate tasks like de-skinning meat or fish, a sharp paring knife is a must.

The Top Usages of a Boning Knife

Removing the Bones From the Meat

Evidently, a boning knife’s main purpose is to remove the bones from the meat precisely. However, the specifics of how you will go about doing so depend on the meat in question. In general, though, consider the pointers in the following section.

Put the meat on a chopping board and use a knife to locate the bone. For this, it may be necessary first to remove a bit of fat or skin. Then, using the tip of the knife, trace the contour of the bone with the blade. This will enable you to create a shallow but exact incision into the flesh, preparing for the next step.

Then, place the length of the boning knife blade into the incision you created and saw backward and forward over the surface of the bone. Apply the necessary amount of momentum to complete the task. Often, you may have to repeat this sawing motion several times. In the end, you should successfully remove the bone. You can use this method with both raw and cooked meat.

Take Out the Skin From the Meat

Put the meat on a cutting board and proceed to make marlins following along with the layer of skin. Next, using the edge of your boning knife, create a tiny incision as close to the meat as possible without cutting it. To do this, you might have to cut away a little flap of skin up to one or two inches in length.

Then, with care, keep that flap of flesh in place and delicately slide the length of your boning knife’s blade along it. At that point, divide the skin away from the flesh with a series of precise incisions and cuts.

If you look attentively, you’ll find that the skin is tightly wrapped around the flesh. Hence, you will need to position your boning knife correctly so that the edge can reach every curving of the skin. This is the most efficient way to separate the flesh from the skin thoroughly. If you want to learn more about boning knives have a look at our list of the best knives for butchering deer.

Extracting the Skin From a Fish Fillet

Even though a boning knife is not the same as a fish fillet knife, it does make for an excellent substitute. In other words, you may still remove the fish’s skin using only a boning knife. It might take some getting used to, but the process will not be that much different.

Start by placing the fish on a chopping board with the skin side down. Then, simply make a little cut between the meat and the skin with the point of the knife. It is essential to aim carefully, sticking tightly to the edge of the skin.

Using your other hand, take the detached flesh and cut it into small pieces with the boning knife. During that, remember to go slowly as not to ruin the delicate flesh. Maintain this cutting motion until the skin entirely detaches from the fillet.

Inscribe Your Fruits and Veggies

Because the boning knife’s blade is so sharp and flexible, it may be used to carve a variety of different foods. Also, you can use it for cutting any fruits and vegetables.

However, we recommend that you use some more standard types of knives for those purposes. As a rule, boning knives are best when it comes to meat or fish-based dishes. For other purposes, you should handle them very carefully. Once you understand this principle, feel free to experiment and be creative.

Surprisingly enough, you can use your boning knife even when baking. Make use of the pointed tip of a boning knife and treat it as a cookie-cutter when in a hurry. Furthermore, use the blade to slice a hole in the center of a cupcake before filling it with frosting. Finally, you could use the pointed tip and sharp, flat blade to sculpt the exterior of a cake. In these ways, you can produce some trendy-looking sweets in no time.

Instructions on How to Clean a Boning Knife

It is advisable to clean and dry your cutlery by hand after every use. Even though most knives are made of stainless steel and are generally sturdy, water may swell and deform the wooden grips. It can also seep into cracks and do some damage later on. Rust is always a threat to chrome coatings.

A boning knife is a versatile tool that holds many potential uses. Its slick build and razor-sharp blade contribute to its precision. So, you should look for one such tool for every delicate task.